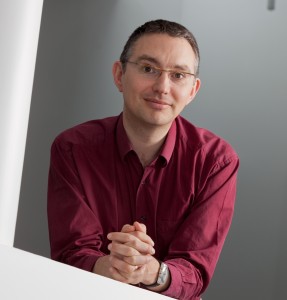 Head of the DANTE project-team at ENS de Lyon

formerly head of the PANAMA project-team  at IRISA, Rennes

Rémi Gribonval is a Research Director (Directeur de Recherche) with Inria and the head of the DANTE research group of Laboratoire de l’Informatique du Parallélisme at École Normale Supérieure de Lyon. He is the former scientific leader of the PANAMA research group on sparse audio processing at IRISA, Rennes, France. In 2011, he was awarded the Blaise Pascal Award of the GAMNI-SMAI by the French Academy of Sciences, and a starting investigator grant from the European Research Council in 2011. He is an IEEE fellow and a EURASIP Fellow. He founded the series of international workshops SPARS on Signal Processing with Adaptive/Sparse Representations. Since 2002 he has been the coordinator of several national, bilateral and European research projects. He was a member of the IEEE SPTM Technical Committee (2011-2017), of the EURASIP SIG-DML Special Area Team (2015-2022), and the founder and chair of the SPARS steering committee. He is on the Scientific Advisory Board of the Acoustics Research Institute of the Austrian Academy of Sciences since 2018. He was on the editorial board of EURASIP Signal Processing (2003-2006) and a Senior Area Editor for the IEEE Transactions on Signal Processing (2019-2021).  He is on the editorial board of the journal Constructive Approximation since 2019.